August 26, 2006 was the day Steve and I had our first date. That night was awkward, nerve wracking, and then, out of nowhere, became the beginning of something really special.

You see, that night Steve picked me up from my friend's apartment (since I didn't have one of my own) and had planned on taking me to dinner. We went to Applebees because that's all there really is in a college town, but both of us were too nervous to eat or really talk at all. The guy actually answered his cell phone at dinner.

Shortly after that I realized we wouldn't really get to know one another if we stayed at Applebees, so I suggested we go to my favorite place in Columbus... the Riverwalk.

Steve paid and we quickly made our way down to the waterfront and sat on a bench looking up at the clouds, pointing out the shapes we saw.... having a blast. We finally started talking to each other like we had done at the party the previous Saturday night. He told me I was beautiful and kissed me right there on that park bench by the Chattahoochee and we decided to be together no matter what. 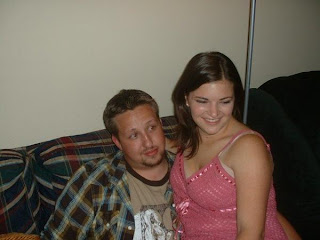 our first party after becoming a couple
Now here we are, 5 years after that first date, and the dreams and plans we made back then are coming true. We are living in Atlanta in a great townhome. Steve has a job he loves. I'm finally finishing my degree in a field I'm passionate about. We have a dog that we love and adore as if he were a child.
Life isn't perfect, we have rough days and craziness always manages to find us, but that's kind of the point. We've spent the last 5 years dealing with life as it comes and even the big blows weren't so terrible because we took them on as a team. As lame as this sounds, he's the Spock to my Kirk. :)
Posted by Bekkah at 9:15 AM