Living on a prayer


The big move happened. I was told I would be displaced 10 days before the county actually gave me my official assignment. Last Monday I actually worked as a substitute teacher because my room was packed up and they needed an extra sub.

After all was said and done, I was sent to a much smaller school than the one I was at previously (1300 students to just barely 700) and I went from 1st grade to kindergarten. I also went from a 10-15 minute commute to a 40-45 minute commute.

The school I ended up at is a lovely school in and of itself. The principal has been amazing thus far and my grade level team (all 3 of them) have been as welcoming and helpful as possible. They began the year with 30 kids each, so they are thrilled to have some relief. The school has a lot of community involvement and does so many of those nostalgic, quintessentially elementary school things so many of us miss like dressing up for Halloween, pajama day, assemblys for special days, and school spirit events involving water/slime/etc. Both of my kids have great teachers who also have kids attending the school. They seem to be adjusting well and both have already made several friends.

I was given a full 4 days in my room to prepare for the kids and the bookkeeper for the school gave me free reign on ordering supplies for my classroom, so that was awesome. I got data folders on my kids my very first day as well, which was helpful.

It's not a bad place to be.

That said, I feel like I'm drowning and I feel insanely guilty for having such a difficult time adjusting.

Kindergarten is NOTHING like first grade. It's nothing like I have ever seen or experienced before. I did my practicum in kindergarten for my degree during the end of the school year when they were practically 1st graders. These kids are sweet as can be, but they have no idea how to be in school. They are not independent in any capacity other than using the bathroom on their own. That's a huge difference from 1st graders who can at least focus on a task for a few minutes without direct teacher direction. I've drafted a letter to my Alma mater letting them know of this gap in teacher preparation. It's that much of a big deal.

The other teachers on my grade level are providing as much support as possible, and they truly have been a great resource, but they are also teaching and trying to rearrange their classrooms to accommodate the new status quo. Our paraprofessional is basically a saint, but she is also helping 4 different classrooms. It's like the first week of school again for all of kindergarten, but the school year itself is continuing to go on as planned.

I have parent teacher conferences this week. All of the data I am discussing for my 22 students is data collected by other people 8 weeks ago. I have been able to observe these kids in class for 1 week, so my ability to give feedback on their progress is limited at best. Yet I have to produce conference forms detailing their progress for each of the 5 subject areas. And I already have parents emailing me asking for pre-conference data. I didn't even know this was a thing. In my last school it was like pulling teeth to get parents to show up for conferences in the first place and all they wanted to know was if their kid was behaving.

On Wednesday I had a parent come in for a conference and request SST services. I've never done that process before without being the person who collected the RTI data as well. I don't even really know this child, but I need to give my professional opinion on her academic ability?

Because I am ESOL certified, I was given all of the ESOL served kids in kindergarten (all 6 of them) which is fine with me since I love ESOL instruction. However, I'm finding that ESOL instruction in an upper middle class suburban school is much different than in an urban, lower socioeconomic level school. Parents don't like walking into the room and seeing labels and pictures on everything. They don't want to see alternative work spaces and hands on, authentic experiences. They want "more rigor" than that. They want to see graded worksheets with 100 written at the top in red pen. *rolling my eyes* I thought kindergarten would appreciate that more....

Then, this week, I received a student new to the school. His family literally arrived in the US on Friday and he began school on Monday. He was put in my class because he speaks only Spanish and I speak enough to be able to communicate with him and understand most of his responses. However, this child is clearly very angry at the changes in his life and I am the one receiving the brunt of his anger. On Friday I actually broke down and sent him to the principal's office because I could.not.deal. with his behavior. He threw pencils at me, hit me, kicked my Promethean board, was running around the room. And when I told him to stop (in Spanish) he looked at me, rolled his eyes, and continued acting out saying he didn't have to listen to me.

I've never had to send a child to the principal before. Not when a third grader was throwing chairs, not when a fifth grader lost control and was sobbing hysterically on the floor yelling curse words, not even when one of my first graders tried to start a fight club on the playground. I was able to diffuse all of those situations and come out the other side with all parties feeling able to move forward.

Not this week. And I feel like I failed that student.

Combine all of those school issues with the fact that I am coming home loaded down with work just to keep up, the kids are grumpy from being cooped up in the car so long, and the fact that Steve just this Wednesday returned to his normal 8-5 hours and you have a giant mess.

The kids are mad at me because I'm not able to do as much with them after school. I simply don't have the energy. I can barely make it through helping with homework. The home cooked dinners everyone has counted on for the last 2 months have also given way to ordering out more. I fell asleep boiling water for spaghetti one night and it freaked me out. The kids aren't happy that our routine is disrupted (even if they can't verbalize that's what it is) and they are directing all of that frustration towards me.

I'm pretty sure I'm only surviving on the prayers of my family and friends (hence the theme music for this post) and the grace of God at this point. Please, pray for me and my family. Pray that we make it through this season of change and uncertainty. Pray that we can see the positives and hold onto hope through seemingly impossible levels of stress.
Posted by Bekkah at 9:24 AM 1 comment: 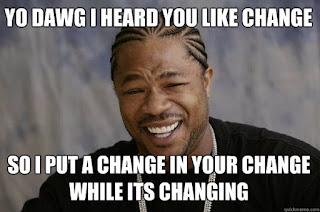 In all seriousness, it's been nuts around here.

As you know, I started a new job in a new county and school district this year. Still first grade, but everything else changed. So I settled into my routine there and somehow also settled into being a working mom.

Ok... as settled as possible in a month.

Then, Y quit dance because she felt she had no time to do her homework or play. Which was basically true.

Then we got new furniture for the downstairs of our house. It's like a completely new space.

Steve's schedule got changed to 11am-8pm for the month of September. He gets home after bedtime and doesn't wake up until we are out of the house in the mornings. So I'm doing this daily parenting thing almost completely solo.

Then, on friday my principal told me that, due to low enrollment, I'm being moved to a new school with the opposite problem. Not sure where yet, not sure what grade you'll be teaching either. We'll let you know before you report to your new location in a week.

I spent this week gathering my student's work and data to put it in some sort of organized fashion for my students' new teachers. I also started prepping my 16 little 6 year-olds for the huge change or getting a new teacher after a month of school.

All while not knowing anything about my own situation except that I'm leaving. And I have one work day to pack up my room.

Oh yeah... and not sure when I'll be able to register my kids at the new school since they WILL be coming with me. Not sure how I'll juggle things if registration doesn't mesh with my new schedule.

And let's not forget that, to my kids, a new school was always code for "new home". So they have been experiencing one giant emotional trigger for a full week. Lots of defiance and acting out which is not normal for them. Tons of fun for me. Because again, I'm pretty much on my own.

It's been a stressful September to say the least.

Our family could definitely use some prayers to get us through this crazy transition.

About a week ago I went to confession. As I waited in line for my turn, an older woman walked into the sanctuary and walked to stand behind me in line. Before she got to her place in line, she looked up at me and caught my eye for just a second, then immediately began rummaging in her bag.

Shortly thereafter, I felt a tap on my shoulder.

She offered me a prayer card featuring St. Raphael the Archangel and said "Take this. You need this prayer".

St. Raphael, Archangel, medicine of God, revered friend and intercessor of those in need, healer of the blind, terror of the demons, accompany us on our life's journey here, guard us to our salvation in the next.

Bring healing and freedom to us from God, to praise and glorify Him as our Father. Protect and deliver us as we humbly pray from all temptation and bondage of the devil.

Oh St. Raphael, guardian and defender of families, obedient messenger of God, Most High, assist us that our fiat to God may be firm, to carry our crosses daily, and follow Jesus in perfect surrender to His Most Holy Will for the greater praise and glory of God and the salvation of souls.

Raphael means "God heals" and my family is in need of healing. The kids have their past traumas, Steve and I have our infertility, and each of us have our own insecurities and demons we battle daily.

Call me crazy, but I needed this reminder that God has our back and that he has sent us the most amazing helpers to guide us on this journey.

It is further proof to me that we are following God's will for us and listening to him. And that's all we ever wanted to do.

Look up the story of Raphael if you get the chance. It's truly incredible and encouraging. Especially to this mama of a family on the road to healing.
Posted by Bekkah at 10:04 PM No comments: