I am hosting a Pinterest party for my cohort next month and today I put together a small board with the options for our crafting at the party. The guests will "like" the pin they most want to create and I will provide supplies for the top two pins for people to make at the party.

At first I was just going to use pins I already had in my "classroom ideas" board. Then I realized how few I had pinned that were actual things to make rather than ideas to try. So, I went looking for new ideas.

Friends.... I am not even going to admit how much time I spent browsing pinterest and teacher blogs. There were so many great ideas! I found about a million new ideas for my future classroom and, more importantly, I found about 7 potential crafts for the party. It was seriously a pinterest binge. Now I just need to go to the dollar store and get supplies for all of the things I want to make. :)

In all seriousness, I am far beyond excited to begin planning for my classroom this fall. The email with my placement information should arrive in the next couple of weeks and I will more than likely begin pre-planning the first full week of August - just a little over a month from now! I can't believe I have just one more semester left before I have my degree and I will actually be a teacher. I have come a long way from that super intimidated pre-teen working with little ones in Mexico, and even further from that miserable young woman afraid of chasing her dreams.
Posted by Bekkah at 10:27 AM No comments:

Yesterday we had our housewarming party for our new home!

I have been so busy the last few weeks painting and getting the house put together for this party. The previous owners of our home left a lot of things behind and the house itself needed a bit of TLC before I could feel comfortable having people over. I know I keep promising before and after pictures, but I want to do a tiny bit of tweaking first.

Anyway, we decided to go ahead and have the party once the majority of the work was done. After all, we will more than likely never be completely done decorating. :)

We kept things really simple and light with both the decorations and the food. I used some of my Great Grandmother's mason jars in various sizes as vases and bought some simple flowers from the grocery store Friday afternoon. 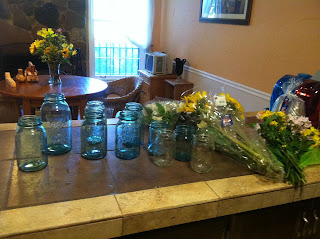 I'm really pleased with the way they turned out! I put them in various places around the house such as the bathrooms, the end tables, and on the food table. 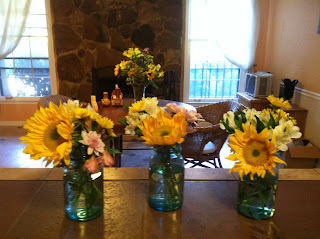 Using some large sunflowers helped fill out the arrangements without costing a lot of money.

That's pretty much it for the party decorations! I chose instead to focus on making some really good food. 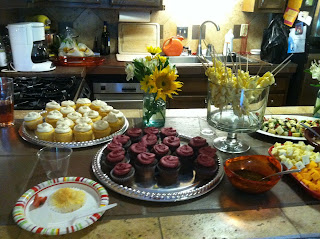 Of course I had to have some sort of cake. Parties without cake are just glorified meetings. I found two great cupcake recipes on Pinterest: Pineapple Cream cupcakes and Blackberry Chocolate cupcakes that were a huge hit!
To the right of the cupcakes are tortellini skewers with some pesto dipping sauce, cheddar and pepperjack cheese cubes, and mini caprese salads. (Please excuse the plate and cup. I forgot to take pictures before people dug into the food!) 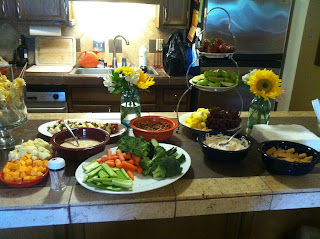 To the right of the cheese we had a creole dip for pretzels and the vegetable tray, and a cinnamon cheesecake dip to go with some graham cracker sticks and the fruit tray/tower. Later in the day we also had a tray of grilled chicken tenders that had been marinated in our favorite barbecue sauce. Steve grilled them over hardwood charcoal on his new grill. So tasty! 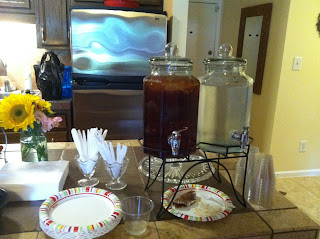 For drinks we had ice water and sweet tea in these cute 1 gallon dispensers from Bed, Bath and Beyond. 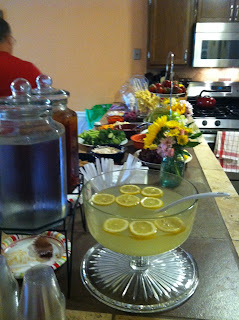 We also had fresh squeezed lemonade in our convertible punch bowl/ cake stand. It turned out so well! I had to juice about 36 lemons to make two batches, but I received a lot of compliments on it, so it was worth the fuss.

One thing that really helped a lot was purchasing two plastic drink dispensers from Walmart. They each hold about 3 gallons and have a spigot for easy dispensing. We were able to make the drinks the night before and chill them overnight which ended up being incredibly convenient. I would absolutely recommend it if you are hosting a party. That way, if you run low on drinks, you just grab the next gallon out of the refrigerator rather than having to make a new batch during your party. Ours were less than ten dollars each.

We received so many compliments on the house and had so much fun with our friends and family! I can't wait to host another party... which will most likely be a Pinterest party for my cohort at the end of July. :)

Sunday, May 26th, was Steve's birthday so we really chilled out and relaxed. We went to church, grabbed some brunch, and then I made banana pudding for Monday's cookout while everyone else took a nap. Our day ended with a trip to the local dinner theatre to catch Star Trek: Into Darkness. It was excellent! Anything with Spock makes me happy. :)

It ended up being a really great idea to have a relaxing day between two such active days. We really hit the ground running on Monday!

Our first stop was the Georgia Aquarium. I had not been since it opened several years ago, and Steve had never been before, so it was a really fun experience. There are a few exhibits with "touch tanks" where a marine biologist tells you about a specific type of animal and you are actually allowed to touch the animal. 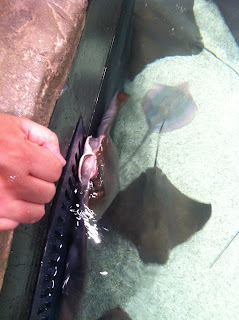 The first touch tank was full of manta rays. This one swam right up to Steve and kept opening and closing his mouth! Glenda said he was trying to wish Steve a happy Birthday. :)

It took us a few hours to see everything in the aquarium, but there were a few things (like the dolphin tales show and tree frogs) that we didn't take the time to check out. Instead, we spent a lot of time staring at the enormous ocean environment tank with the whale sharks and interacting with the penguins. 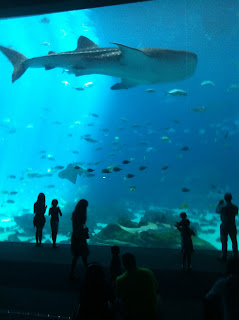 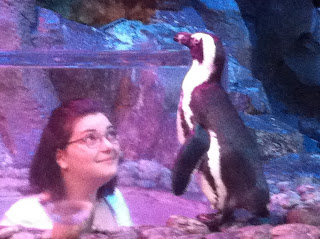 After the aquarium, we made our way over to CNN Center for lunch and a studio tour. There wasn't much to take pictures of, but it was neat to see the sets and production spaces for so many shows. Steve and I like a few different CNN and HLN shows and both of us have some background in journalism (mine was in middle school, but whatever) so seeing how the shows went from start to finish made our nerdy little hearts happy.

The grand finale was the World of Coca-Cola.

Fun fact, the World of Coca-Cola used to be in Underground Atlanta and moved to their new location in 2007. No one in our group had been to the new location, and I was the only one of the four of us who had ever been to the original location. This experience was totally new for everyone and we had a great time!

I feel like the World of Coke was particularly kid-friendly. The memorabilia was broken up into several smaller displays with a lot of interactive places and more modern things so that kids (and my ADD husband) won't get bored or burnt-out. There were also opportunities to get your picture taken with the Coca-Cola polar bear, huge Coke bottles designed by countries all around the world for the olympics, and an original 4-D movie with moving seats! I was very impressed considering the original location was basically a traditional museum where you just quietly walk through cases of old stuff. 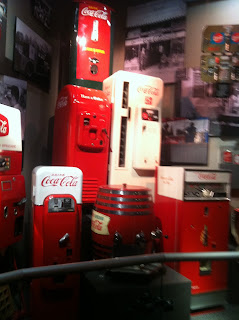 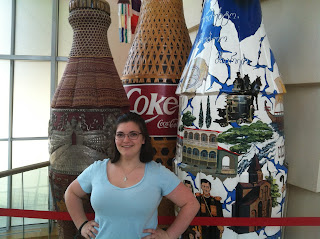 Steve's favorite part of the whole tour was the tasting room at the end. There are fairly large hubs of fountain style drinks where you can taste all the Coca-Cola products produced from all over the world. Each hub represents a different continent and the drinks are labeled with the name of the drink and the country where it is produced. My favorite is from Peru. It's called Inca Kola and tastes kind of like bananas. 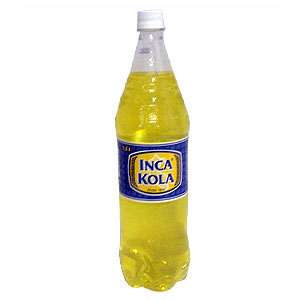 When you leave the World of Coke you get to choose a glass bottle of coke with a special label saying it's from the World of Coca-Cola as a souvenir. Pretty cool if you ask me. That's not to say they don't have a gift shop with tons of OTHER souvenirs for the coke fanatic, but those aren't included in the price of your ticket. :)

Once we finished drinking our fill of Coca-Cola, we made our way back to the car and headed home for burgers on the grill and home made banana pudding. All in all, the weekend was a complete blast! We are still recovering from all the fun even a full week later, but it was worth it.