Yesterday I received a very pleasant (automated) email from the testing service which scores the GACE. As you all know, I have been on pins and needles all month waiting on my score report to get here so you can imagine how happy I was when the email came a few hours early. In fact, it came during my classroom management class. I'll go ahead and admit that I couldn't wait and was very rudely reading my email during a classmate's presentation on bullying. :(

I couldn't feel too badly about missing the presentation though since I PASSED! And I did not simply pass the test, I kicked it's butt! I got all of the multiple choice questions in all content areas correct (even math!) and did pretty well on the short answer portion too.

Now all I have to do is graduate and the state will give me my certification. That is quite an appealing thought to ponder.

Although my testing nerves are over for the GACE, they have just begun to set in for finals. Those nasty buggers are next week. At least I only have two this semester.

Lastly, my students (by this I mean all of the kids at my school) just finished taking their CRCTs last week! I'm proud of them for making it through such a big test and thankful that I no longer have to pass the time during placement in the library. This week is my last one in my placement, so it's a bit bittersweet.

The sweetest part is knowing that I'll be starting student teaching in August!!!
Posted by Bekkah at 5:18 PM No comments:

The end {of the semester} is near!

Quite a bit has happened since my last post.

Of course, as I said last time, we have a new Pope! 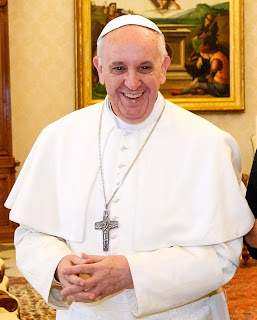 I know I'm new to this whole Catholic thing, but Pope Francis is just adorable.

Speaking of being new to the Catholic church.... Steve and I were confirmed at the Easter Vigil service a few weeks ago! We are now full members of the church. It feels wonderful! 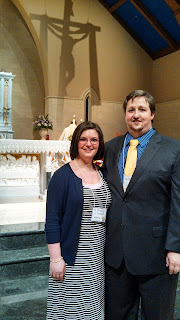 Besides all of that excitement, the school semester has continued on and I have found myself elbow deep in projects and tests.

On March 22 I took the GACE which is the certification exam for teachers in the state of Georgia. My scores won't be available until April 20th but that doesn't stop me from obsessively checking the website to see if they posted early. It's a lot like waiting for grades to post at the end of the semester. I'm about 98% sure I know what I will see, but I still want the confirmation of actually seeing it officially posted. Until it is official my mind will continue generating worst case scenarios. For example, what if they invalidate all the tests for that date and I have to take it all over again? What if they lose my scores?

Also, I have been spending two days each week working with ESOL students and I am loving it! Those kids are awesome and so is being able to give a ton of individualized attention due to the smaller classes.

That said, I spent some time this week back in a general education classroom (1st grade) due to CRCT testing and I was reminded just how much I love being with the same kids all day. It will be a tough choice once I graduate.

Lastly, I had a meeting last week about student teaching. You know, my LAST semester of school. Nothing too exciting. ;)

I won't know my exact placement until probably early July, but (obviously) I am really praying for my first choice school and teacher. No matter what happens though I am just so excited to be at this point in my degree program. There was a time when I honestly did not think I would ever finish my degree. I thought becoming a teacher was something that just wasn't possible if I wanted certain other things in my life. It's looking like that just isn't true and I am so thankful.

Just a couple more weeks (3 to be exact) until I am officially done with this semester and on summer break!