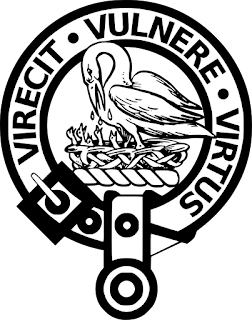 My family heritage can be traced back to Clan Stewart, a group which originated in the Scottish Highlands and has an absolutely beautiful tartan.

The picture above is the clan crest. It depicts a pelican piercing her own breast to feed her young... an image from an old Scottish folktale... and the inspiration for the clan motto seen in Latin around the image. It translates to "Courage grows strong at a wound".

I have never identified with that mama pelican more than I have in the last few months.

I have never fully understood this motto more until we met our children a few months ago.

September 2016 has been a month of enormous personal growth for me. At the beginning of the month it felt like the hits would never stop coming. In the middle of the month I thought the confusion and pain would beat me and I would lose everything.  Now, at the end of the month, I am grateful for the fight because it strengthened me.

It showed me how tough I am. And it showed me that my strength comes from a deep reservoir of love and courage I never knew ran that deep. It comes from seeing myself in a dark place and recognizing how I have conquered that particular demon before.

It comes from trusting in the gifts God has given me.

Nobody had to go see the principal. Nobody threw fits. Nobody went home crying... not even me.

I have to follow my instincts. I have to trust myself.

And I have to have courage.

The pain I've been though has gifted me that and I refuse to squander it.
Posted by Bekkah at 9:41 AM